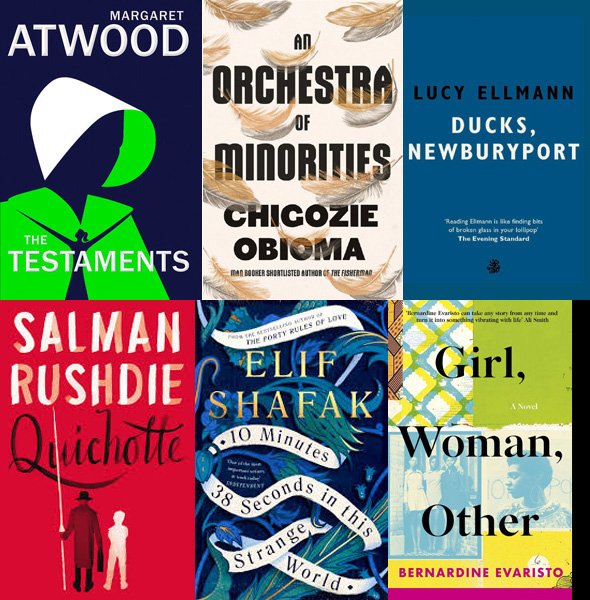 It is no surprise that this year’s Booker shortlist is a surprise. Second-guessing the judges is always a fruitless task and a cluster of fancied names have not made the cut – the critics’ tip Deborah Levy and the much fancied Max Porter and Kevin Barry being among them. The two biggest names though, Margaret Atwood and Salman Rushdie, both past winners, have made it through. They are now in line to join the most select company possible and become only the fourth double winner in the prize’s history alongside Peter Carey, J.M. Coetzee and Hilary Mantel.

The stories themselves encompass a modern reworking of Don Quixote set in America and Britain and taking in opioids and meta fiction by Rushdie; a sequel to The Handmaid’s Tale from Atwood (still, frustratingly an unknown quantity of a book since it is not published until 10th September and remains wrapped in cloak-and-dagger secrecy); a story of a life after death in Istanbul, narrated by a murdered woman as her life force ebbs, from Shafak; the intersecting stories of 12 black women whose lives touch in 20th and 21st century Britain from Evaristo; a star-crossed love story set in Nigeria and Cyprus from Obioma – who also becomes a two-time shortlistee; and a thousand-page, one sentence freewheeling epic about information and ecology from Ellmann.

The nationalities of the shortlistees are always a point of interest and this year there is only one Brit, Bernardine Evaristo, a Nigerian (Chigozie Obioma), a Canadian (Atwood), three hybrids of Indian,  British and American in Rushdie, a British-American (Lucy Ellmann) and Elif Shafak who is Turkish-British. It is a roster that reflects the polyglot and intermingled nature of the modern world.

The Booker shortlist of six novels is:

Chigozie Obioma An Orchestra of Minorities