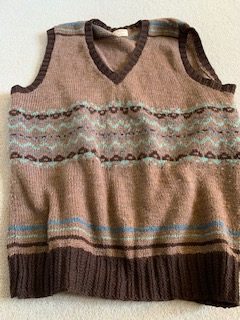 The Jumper by Anne Sebba

I have started knitting a jumper. Two weeks ago I would never have imagined myself uttering those six words let alone believing them. It’s the best way I can think of to relax and feel creative at the same time.

Years ago, newly married and living in New York with no family and only a handful of friends, I started small knitting projects for my new baby. When the baby became a toddler I carried on. The cardigans and jumpers were so tiny and easy to make and the results were rather cute. Seeing my child wearing them made me feel I was a good mother. But then I took a leap and made a complicated Fair Isle sleeveless waistcoat (they were called jerkins back in the 70’s) for my husband. He was a big man so this was the equivalent of four baby sweaters at least. This endeavour, following a complicated pattern which involved charts and counting, was a form of devotion that I knew expressed my total love more than anything I could ever say or bake. I can’t imagine where I learned the technique since no one had taught me – what utter adoration! But I realise now it was more than that. I had just been fired from my job as a Reuters’ foreign correspondent after I told them I was pregnant in 1977.  And shortly after that we had moved from London to New York, following my husband’s career. Part of me thought I would never work again. In which case I might as well be the best, the most domesticated, mother and wife I possibly could be. Knitting, quilting baking were all necessary for this accolade.

But I soon gave up knitting altogether partly because, as soon as my children could talk, they complained that the home made sweaters were too itchy. And also I discovered I could work after all as a freelance author and journalist. The craft work had to go.

I had completely forgotten about the knitting phase of my young life until my husband died, suddenly from a heart attack about a year and a half ago. When I finally got around to clearing out his clothes there, at the bottom of one of his drawers, was the FairIsle jumper with a label stitched in the neck which someone (was it him? It certainly wasn’t me) had given me saying ‘Hand Made by Anne Sebba’.  How touching. Everything else from the 70’s had long since been chucked but this he kept. His devotion in keeping it more than equalled mine in making it. Then a deeper reminder of the knitting phase hit me as I was researching my latest book, a life of Ethel Rosenberg, electrocuted in 1953 for conspiracy to commit espionage. Ethel had spent the last three years of her life in prison, two of them in solitary confinement, which of course gives new meaning to the word isolation.

While she was in her first prison awaiting trial some of the other women on remand there befriended her, teaching her how to knit. First, she made a sweater for her social worker then started making matching jumpers for her two young sons. But these remained unfinished when she was moved to her next prison, where needles were forbidden. She asked her sister in law if she wouldn’t mind finishing them. I understood how much this saddened her not to be able to complete the project as she too yearned to be the very best mother she could possibly be, even from prison.

But I am not in prison and, however ghastly this enforced isolation is, I can pick up my knitting at any time of day or night. Actually as my hands are busy my thoughts are somewhere else entirely, reflecting on the huge amount of freedom I have.

And my home made sweater? I will probably never wear it but while I am making it the satisfaction of seeing something grow and the comfort of repeating row after identical row keeps me calm. I shall show it my grandchildren and they will laugh when they think about what grandma did to survive the coronavirus outbreak.

Anne Sebba is a best-selling author and journalist.  Her next book, a biography of Ethel Rosenberg entitled ETHEL ROSENBERG: An American Tragedy, will be published by Weidenfeld in the UK and St Martin’s Press in America in 2022.