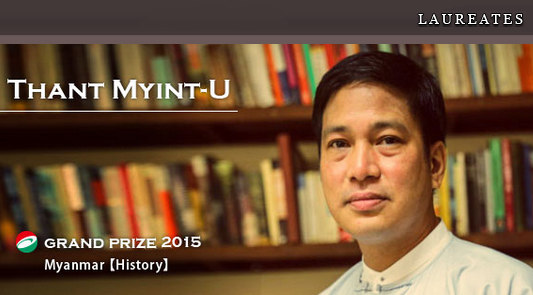 “Dr. Thant Myint-U, an exceptionally outstanding historian, beautifully records the history of his ancestral homeland, Myanmar (Burma), with analytical clarity from a global perspective. Based on his own experiences in United Nations peace-building operations in Cambodia and the former Yugoslavia, he is now engaged in efforts, in cooperation with the national government, to further peace in his own country.

Dr. Thant Myint-U was born in 1966 in New York City. After graduating from Harvard University, he enrolled at Johns Hopkins School of Advanced International Studies, from which he received a Master’s Degree in International Relations and International Economics. From 1992, he was involved in peace-building activities in Cambodia and Bosnia-Herzegovina with the United Nations. In 1996, he received his Ph.D. in Modern History from the University of Cambridge.

In his first masterpiece, The Making of Modern Burma (2000), he argues that Burmese national identity and the framework of Burma as a modern nation-state came into being from the late 19th century during British colonial rule. His brilliant analysis has provoked much discussion in this field. In his next work, The River of Lost Footsteps (2006), he describes the history of Burma from multiple angles, tracing the footsteps of various Burmese people, including those of his own family. His latest work, Where China Meets India: Burma and the New Crossroads of Asia (2011), reviews the history of Myanmar as a country situated between two rising powers—China and India—from the viewpoints of people at the bottom of the social pyramid and those living in remote regions close to international borders. In this book, he uses his own characteristic dynamism to narrate the history of Myanmar, moving freely between the past, present, and future. The book has been translated into Japanese and won the 26th Asia Pacific Award Special Prize (sponsored by the Asian Affairs Research Council and Mainichi Newspapers) in 2014.”