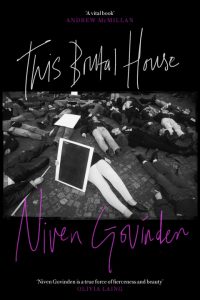 Niven Govinden’s fifth novel, This Brutal House, is an elegiac and politically engaged portrait of New York’s vogue ball community. The novel focuses on a group of ageing house Mothers, engaged in a silent demonstration outside City Hall to protest against the city’s inaction over the disappearance of countless Children. Govinden explores the bonds that form within queer communities, the impact of gentrification on queer spaces, and the complexity of navigating between the queer and straight worlds. Here, he talks to Minor Literature[s] about the book, and his wider career.

If This Brutal House was a runway look, what realness would you be serving?

Stand up and be counted realness – in lace.

The novel touches on the erasure of queer identities, the nature of protest, and the importance of queer communities; what drew you to this story at this time?

I’d been thinking about writing about voguing or ball culture for over a decade. I wrote a voguing-related short story for an obscure Italian queer ‘zine in the mid-noughties, and another editor I showed it to at the time asked me if I was writing a book about the balls. It was a lightbulb moment. Both the story and that comment stayed with me as I worked on other books. Around the time that I finished All The Days And Nights – a novel about art and physicality – the need to write a book about queer experience particularly centered around POC protest was amplified. There was a tone in my head based around a group of house Mothers, unnamed, elegiac, wounded and defiant that felt urgent and needed to be written. It was also a reflection of my desire to write about a religious order, and to use group voices that share collective experience, a fictionalised oral history. Books are also the product of reading / phantom reading, so James Baldwin was on my mind, Sylvester’s lyrics, Robert Caro’s book on Robert Moses, as well as my own nostalgia about queer visibility and diversity of culture in the late 80s/early 90s. Thinking about Keith Haring, Act Up!, Oscar Moore, the Love Balls, Lady Miss Kier, Kathy Acker, Queer Nation, Jose & Luis. Many things.

Central to the novel is the importance of marginalised groups being visible, or seen. The mainstream prominence of drag culture has been significantly raised in recent years, most obviously by RuPaul’s Drag Race – what do you think the implications of this are? Are there dangers attached?

What makes me hopeful is the visibility of the diversity of queer experience in the wider culture. It improves our social language and our empathy. Visibility amplifies lived experience, fosters community and spaces, as well as allowing artists the opportunity to sustain careers. The more the merrier. At the same time, this has to be viewed against a wider societal tension. We’re living in an era of growing intolerance and polarisation. The daily acts of aggression you can face as queer/queer poc for the sound of your voice, your choice of partner – for just taking up space. The resilience involved in simply walking down the street cannot be underestimated. And this is very much reflected in This Brutal House, the defiance and impulse to keep moving forward whatever society gives and takes away.