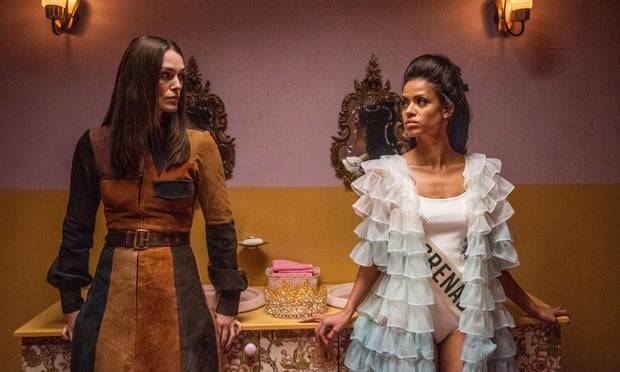 There’s a very British sort of wackiness to this bizarre and farcical true story from the annals of pop culture, told here with charm and fun. It’s the 1970 Miss World contest, which erupted in controversy and feminist protest, winding up with host Bob Hope covered in flour, the BBC covered in embarrassment and the fledgling women’s liberation movement covered in glory. If there is a tonal uncertainty in this comedy, then that’s because there was a tonal uncertainty in the real-life events, and the movie nicely conveys how they were at one and the same time deadly serious and Pythonically silly.

Keira Knightley and Jessie Buckley play the two Women’s Liberation Front activists Sally Alexander and Jo Robinson who launched a protest from the audience; Greg Kinnear plays the American comedy legend Hope, whose sense of humour deserted him horribly on the night; and Gugu Mbatha-Raw is Jennifer Hosten, Miss Grenada, whose dignity and self-belief remained intact. Misbehaviour conveys the unexpected fact that it was the Miss World pageant, for all its absurdity and tackiness, that gave a woman of colour a chance to shine.