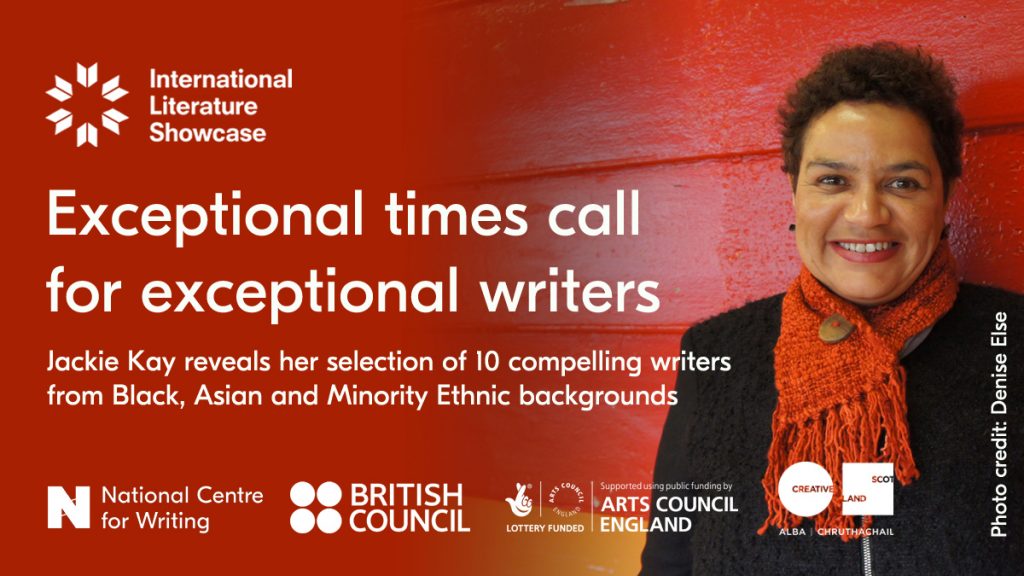 The third International Literature Showcase of 2019 has been revealed. We asked Jackie Kay to personally introduce her selection of UK-based BAME writers.

I would have given a lot growing up to come across these writers. When I was a teenager the only black writer I came across was Wole Soyinka in his poem ‘Telephone Conversation’. When I was seventeen, I went to University and did a course on the Indian Novel. I discovered writers like Anita Desai and Mulk Raj Anand. They were a revelation. Through reading, I travelled halfway across the world. A little later, I found Toni Morrison, Audre Lorde, James Baldwin, Gloria Naylor. I found that reading helped me understand myself, and my complex identity. It helped me piece myself back together again. Books kept me company in the dark. I suddenly found characters that looked like me and asked some of the same questions. I was not alone anymore. I had the very finest of company. It took me a long time though to find writers of colour from this country. The first writer I came across was Buchi Emecheta back in the late seventies; then I found a whole family of Caribbean poets – writers like James Berry, Grace Nichols, Fred D’Aguiar, Jean Binta Breeze. It was like extending your family. Good writers offer the reader something so deeply affecting that the impact stays with you for a very long time. Books you love become part of you. You are partly formed by them.

These ten writers open up the world to you and give you the world back. There’s a worldly-wise wisdom in their work, as well as an abundance of humour. They are bold. They often tackle difficult and dangerous themes with an extraordinary grace and lightness of touch. They are all writers who make the reader ask questions of themselves and their place in the world, and they are all writers that give us back the world in all its complex glory. Sometimes witty, sometimes elegiac, sometimes uncomfortable, sometimes unnerving, sometimes hilarious, sometimes euphoric, these ten writers offer the reader a whole range of experience.

Mary Jean Chan’s work opens the window, and the door.  Her work has an astounding urgency to it. A poet of our time – she captures the newness of everything, stepping into a gay bar for the first time. Her poetry is psychologically astute and culturally complex.

Diana Evans’s fiction is emotionally intelligent, dark, funny, moving, Diana Evan’s novels build and build.  The sheer energy of them is enthralling. A brilliant craftswoman, a master of the form, she makes the reader ask important questions of themselves and makes them laugh at the same time.

Fane Productions presents Helen Fielding: Life Lessons with Bridget Jones! Tickets are now on sale for a conversation with Fielding on discussing everything she’s learned from our favourite 30-something singleton 🎉https://t.co/kHLPfjZ4wj