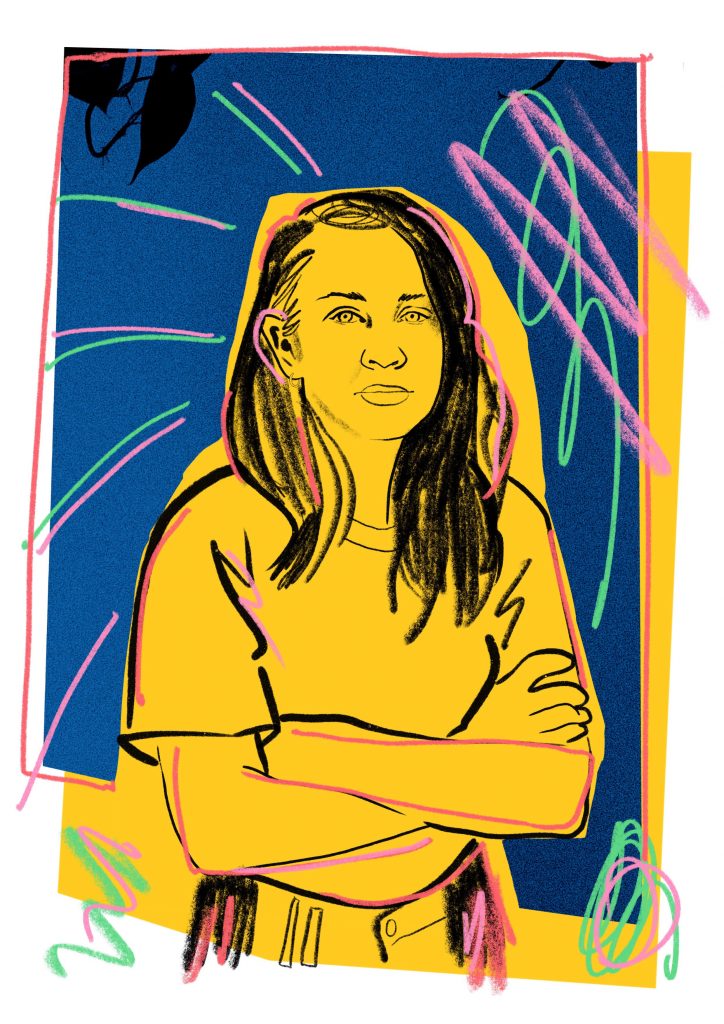 Emma Hope Allwood is a writer, editor, and person who spends too much time on the internet. She’s currently Head of Fashion at Dazed Digital.

“Ross’s ex wife on Friends. What’s her name? Her and my hockey teacher. It was a bit of a wasteland.”

Writer Amelia Abraham – whose book, Queer Intentions: A (Personal) Journey Through LGBTQ+ Culture, is out today – is trying to think of some identifiable lesbians growing up in the heady, pre-social media days of the late 90s and early 00s. It’s a struggle – where the guys had the (admittedly limited line up of) OG Queer Eye, Will & Grace, and Brokeback Mountain, we got Carol and Susan. In fact, Abraham admits that as a kid she had the camp tastes you might stereotypically associate with gay men. “My favourite episode of the Simpsons was the one with John Waters, although I didn’t even know who John Waters was. The first cassette I ever bought was Cher’s ‘Believe’,” she laughs. “My favourite film was Hocus Pocus with SJP and Bette Midler! All just deeply camp.”

While lesbian representation still lags, things have, over the last 15 or so years, come quite a long way for people who identify as LGBTQ+: we can get married, RuPaul’s Drag Race is viewed by approximately seventeen zillion people worldwide, and Pride is sponsored by Barclays. Being queer, at least if you’re lucky enough to be surrounded by tolerant people, is usually about as big of a conversation as whether you’d rather fuck Fleabag, the Hot Priest, or both (hi!). But despite this, it’s not all roses: gay clubs have been steadily dying, the British media is a transphobic Mumsnet clusterfuck, and the Minions (the fucking MINIONS!) had a float at Pride.

“The mainstreaming of queer culture was something I had been thinking about a lot,” Abraham says, reflecting on her motivations to write the book – which takes her from Britain’s first gay marriage to DragCon, Serbia’s much-policed Pride parade, and Sweden’s Centre for Radical Sexuality. “I was seeing the knock-on effects of the assimilation of LGBTQ+ people through things like the closure of gay bars, gay bars I really loved going to. The more people I talked to the more people were like, ‘Oh, gay people can get married now and have kids now and live like their quote-unquote straight neighbour, so why would we need to be ghettoised in gay only spaces?’”

Pulling on her experiences as a journalist for outlets like Dazed, Vice and Queer Bible, Queer Intentions is part memoir, part investigative journey into all the different ways there are to be LGBTQ+. Like most great works, it also came about after a break up. This one involved a dramatically lesbian U-Hauling to Iceland, where she lasted just ten days before packing up and returning to London. Still, the relationship made her think a lot about trading in a life of partying and relative non-monogamy for one of homo domesticity and child-rearing. “It was that first adult relationship where you think you might get married and have kids with someone,” she says. “When it ended I suddenly had a lot of free time on my hands, and I was like, why did I want to get married? Actually I’d always appreciated more alternative forms of living.”

Click here to go to the queer bible and continue reading.