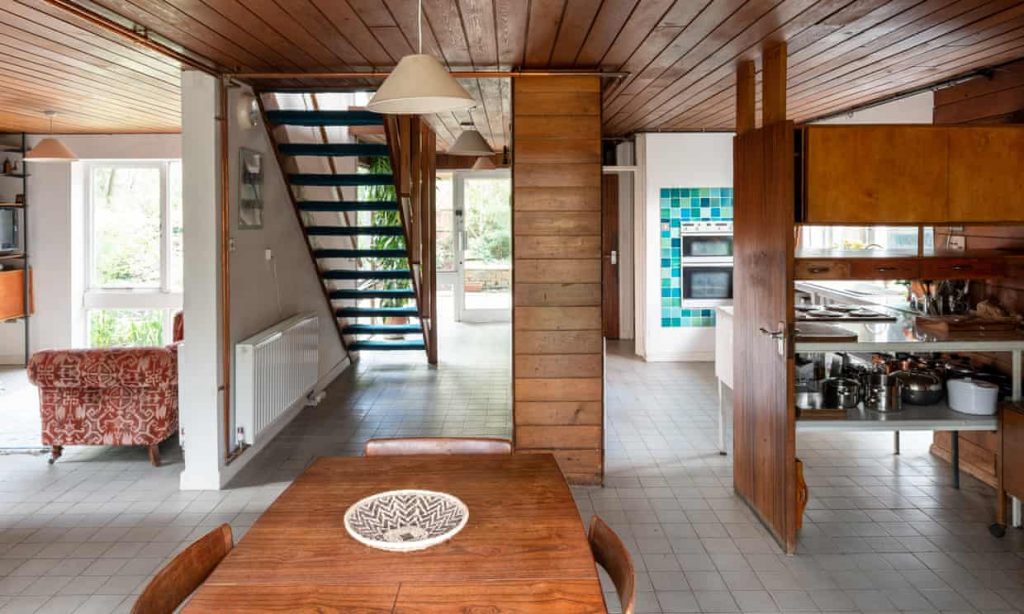 The Drive curves quietly through the green of Maresfield Park, past mature trees, grass verges and tall, polite hedges that offer glimmers of the homes beyond: slate roofs, mullion windows, block-paving, gravel.

Once part of a local manor house estate, the land here was requisitioned during the first world war and afterwards parcelled up and sold as separate plots. In the decades since, those plots have become architectural playgrounds of a sort, adventures in Georgian, Regency and Tudorbethan styles, updated and remodelled, with conservatories, annexes and bifold doors.

It would be easy to miss Bella and Nick Honness Roe’s house. Set back from the road, it is a low-lying brick building with a carport. Built in 1963, it was designed by local architects for a sea captain who retired to this landlocked corner of East Sussex. Save for its gull-wing roof, it has few of the frills of its neighbours.

The couple moved here in the autumn of 2015, shortly after the birth of their second child, leaving behind their two-bedroom flat with cantilevered stairs on the Golden Lane estate in London. “It was tiny,” says Bella. “Our living space was the size of what is now our playroom. And that was fine when we had one child. But then we were hankering after more space, and this place came up …”

For Bella, a film academic, and her husband, a marketing specialist, the appeal was not so much the location, near Gatwick airport and the M25, but the excitement of the house itself. She walks me through the building, from the kitchen along the light-filled corridor that leads to the bedrooms. “It’s all the original stuff,” she says. “The design of that period was very liveable – built-in furniture and wood-panelling, built-in Formica.”

They found the property via the Modern House, an estate agency that launched in 2005 and swiftly acquired a cult online following through its website, mailing list and, later, Instagram. It specialises in design-led, architecturally intriguing properties from former factories to art deco gems, modernist estates, urban spaces, loft conversions, new-builds and even partnerships with Turner prize-winning architects Assemble.