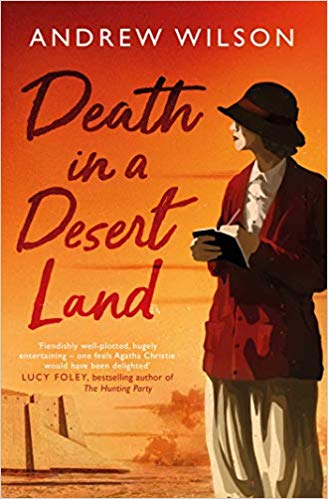 The real-life inspirations behind Death in a Desert Land

One of the first entries in my green Moleskin notebook reads, ‘Suicide/death of Gertrude Bell in July 1926. Note discovered … supposedly written by GB, murdered? — look to Ur.’ It may seem cryptic, but the hastily written scribble contains one of the strands of the plot that eventually became Death in a Desert Land, my third adventure to feature Agatha Christie as detective.

Although it is a novel, the book has its roots in historical reality. Gertrude Bell, the archaeologist, traveller and one of the founders of modern-day Iraq, died in Baghdad in July 1926 from an overdose of the sedative Dial. The death could have been an accident, a suicide, or, even more tantalising, Bell’s own biographer Georgina Howell posits the theory that she could have been murdered as Bell always slept with a gun under her pillow.

Another fact is that, two years later, in the autumn of 1928, the author Agatha Christie travelled first to Baghdad and then to Ur. ‘I fell in love with Ur,’ she writes of the archaeological site in ancient Mesopotamia, which was then overseen by the British archaeologist Leonard Woolley and his eccentric wife, Katharine. The third source of inspiration came from the observation — again true — that Gertrude Bell regarded Katharine Woolley as a ‘dangerous woman’.